At the recent Yokohama International Open Spring 2013, there were 13 players participating (including 3 foreigners, Antonio 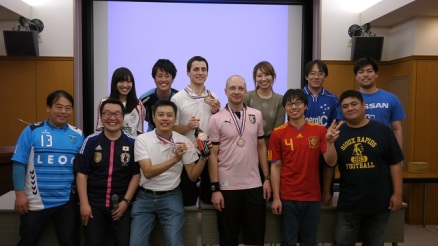 The players were split into 3 groups of 3 and 1 group of 4, and the pre-match warm-ups got underway.

Also … Subbuteo sponsored the competition balls for the event.

During the group stages, there were close games throughout.  Some of the players were relatively new to the game/sport but they showed passion and flashes of brilliance.

After lunch, there were some were some interviews by TV-Asahi (Japan) and AFP (Japan).  For TV-Asahi, they intend to introduce the game/sport to the rest of Japan via 30min segments during their programs.  As for AFP, the story will be distributed to various News Agencies around the world, where the story could be published locally.

So far, there are at least 6 news agencies which has picked the story including Arab News, BBC, TV5 MONDE and Global Post (from USA).

This is really great to see it being announced onto the world stage !!!

Below are the pictures taken during the event …