To celebrate the opening of his new table football flicking venue – christened Stadium de Imagio – Michael Choong (1 of the top players in the local SG table football scene), organised the Stadium de Imagio Open 2014.    This WASPA tournament took place on 24 May 2014 (Saturday) at the Sports Arena premises in Pandan Gardens.  Below is the full report by Nic Tan … 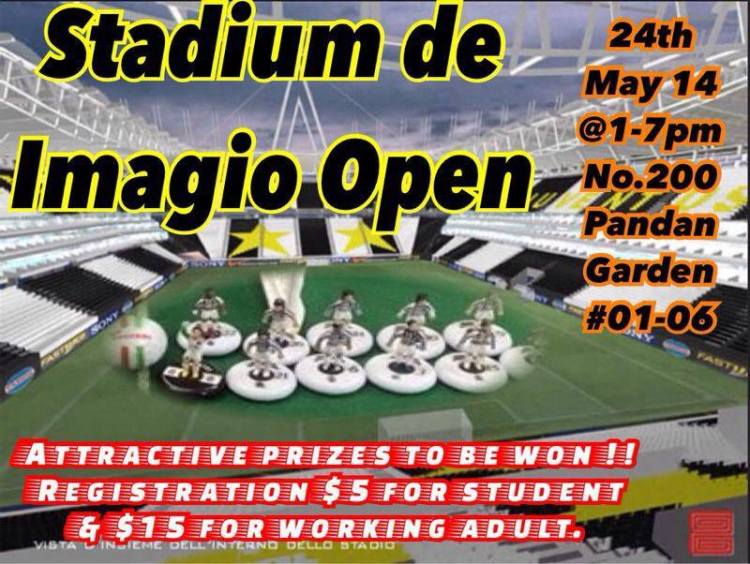 In conjunction with the opening of the latest table football venue in Singapore, Stadium de Imagio, host and veteran player Michael Choong welcomed nine other players for a World Cup-themed WASPA tournament. 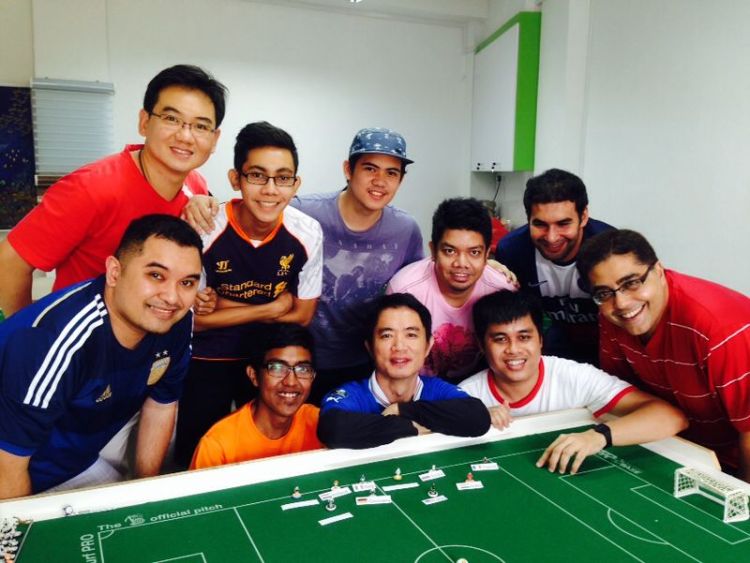 The 10 players were randomly drawn into two groups of five players each, and competed on a round-robin basis. The top two players advanced to the knockout semi-finals (group winner vs. the other group’s runner-up) with the subsequent winners meeting in the final. Concurrently, there were also placing matches between the corresponding eliminated group members to determine final standings (e.g. 3rd-placed players in each group would play each other and so on). Games were played over 20 minutes without a halftime break.

In addition, in line with the upcoming FIFA World Cup, each player also adopted a country to represent to give the tournament a nationalistic feel.

The national teams that were being represented in the tournament

As expected, Ouabi (France) breezed through his group games, winning all of his games convincingly without conceding a goal. Thus, the other members of Group A had to manage their games against one another carefully. By virtue of some drawn games between the other players, Nic Tan (Russia) managed to eke into the semi-finals as his two wins proved sufficient despite two defeats and an overall negative goal difference.

Fauzi (Bosnia and Herzegovina) vs. Fadhly (Holland) in the opening fixtures for Group A

Ouabi (France) vs. Michael (Italy) in the other opening fixture for Group A

Group B also started out cautiously but it was not long before it was clear the Rudy (Argentina) was the favourite to win the group. He ended with three victories and a draw, and similar to Group A’s winner, Ouabi (France), he did not concede a goal as well. The race for runner-up was a tight one as well, where Bernard (England), as a spectator, had to endure a nail-biting final group game between Vikas (India) and Azhar (USA) with his fate out of his hands. In the end, Vikas (India) could not get the required level of victory that he needed and Bernard (England) proceeded to the semi-finals on goal difference, continuing his fine form from his victory at the Leste Aquila SC Futures WASPA tournament earlier in the month.

Bernard (England) vs. Vikas (India) in a Group B encounter

Bernard’s (England) performance was rewarded with a semi-final with Ouabi (France), but Ouabi (France) once again proved his mettle with a convincing 2-0 victory. The other semi-final proved to be a tighter affair. Rudy’s (Argentina) renowned attacking prowess was on full display and Nic (Russia) had to shore up his defence and rely on counter-attacks. Rudy (Argentina) took a 1-0 lead with superb chip shot into the corner, but Nic (France) managed to equalise off a shot from a rolling corner kick that barely crossed the line. Seven minutes of extra time could not separate the two of them so the game went to a sudden death shootout (the only shootout as it turned out in the competition). Both players had their first shots saved. After Nic (Russia) made his second shot count with a chip, he followed it up with a save and thus, a surprising place in the final.

After his 2-0 defeat to Ouabi (France) in the earlier group game, could Nic (Russia) turn the tables on Ouabi (France) in when it mattered most? Unfortunately for him, Ouabi (France) raised his form in a similar manner and took a quick lead within a minute with his trademark chip into the top corner. He resumed his domination for much of the game with Nic (Russia) reduced to trying to soak-and-strike. After enduring several close saves from Nic (Russia), Ouabi (France) got the critical second goal late in the game after dragging Nic’s (Russia) hounding defence one side and then slipping through the middle to place a shot home. There was even time for Ouabi (France) to score one more goal just before time ended after a wild foray by Nic’s (Russia) flicking goalkeeper resulted in lost possession and an open goal for Ouabi (France). 3-0 to Ouabi and 3-0 to France, reminiscent of their FIFA World Cup victory in 1998. Congratulations, Ouabi (France) for continuing your dominance on the local table football scene in Singapore! 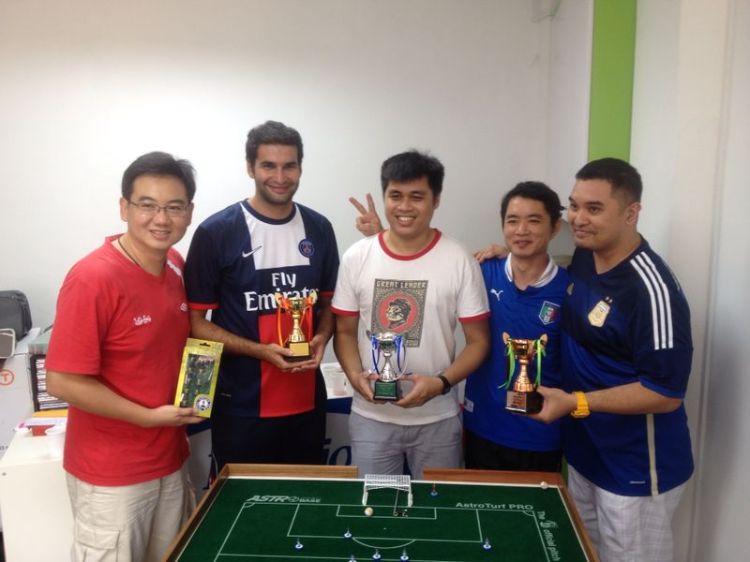