A total of 10 Junior players participated in the TFAS World Cup 2014 held at the Atrium of SAFRA Toa Payoh.  Being a Junior event, the Swiss format of play was adopted to give all players more game-time to hone their skills and encourage their participation in the game.  7 preliminary rounds of matches were played to determine the top 4 players.  The top 2 will then square-off in the Final for top spot while the 3rd and 4th placings will vie for 3rd spot. 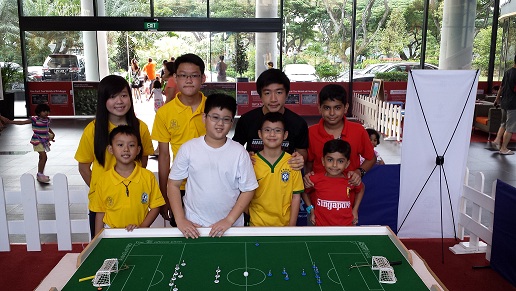 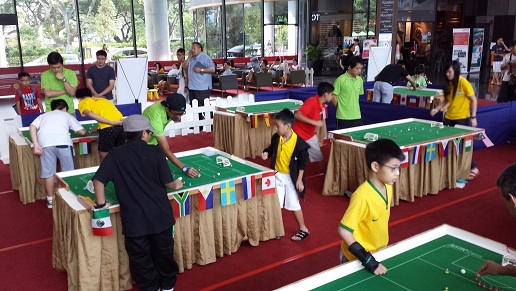 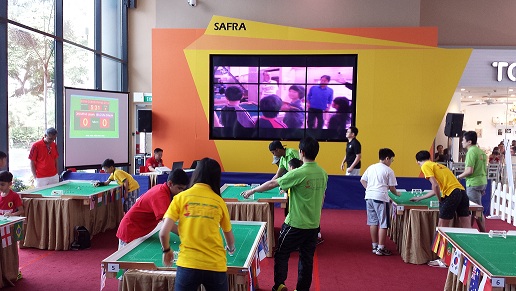 As expected, Giovanni won all of his 7 matches to finish top of the pile with a 100% record of 21 points.  Isaac was next with 5 wins, 1 draw and 1 loss to finish 5 points behind Giovanni in 2nd place.

Luke pipped his nearest challenger to 3rd place by a single point with 3 crucial wins when it mattered – the most notable being the come-from-behind 3-2 win over Jocelyn (the 2013 Merlion Cup 4th Place).  Unfortunately for Jocelyn, results did not go her way in this tournament; perhaps due to a lack of practice resulting from her preparations for her ‘O’ Level examinations.  No worries Jocelyn, you’ll bounce back in the next tournament!!

For Asyraf, it was the recent unfortunate freak accident involving his usual flicking index finger.  However despite his injury and clearly not at full fitness, Asyraf still put up a gallant display by playing with his middle finger.  Kudos to Asyraf, we salute your fighting spirit!! 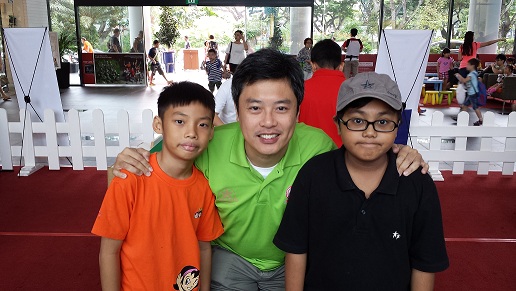 This tournament also see the emergence of a very young & talented 7-year old boy – Ruhan Sham.  He caused quite a stir with shock victories over older and more established Juniors.  He even outdone his older brother Bhavin by finishing 2 places higher in the standings.

Great work also to Darren, who similarly outdone his 2 older siblings (Dickson and Jocelyn) by finishing above them in the standings.  1st-time participant, Eugene, also had a commendable outing in his maiden tournament garnering 5 points from 1 win, 2 draws and scoring 2 goals in the process.  Great effort Eugene!! Keep flicking …

The final standings after the 7 rounds of preliminary matches as follows: 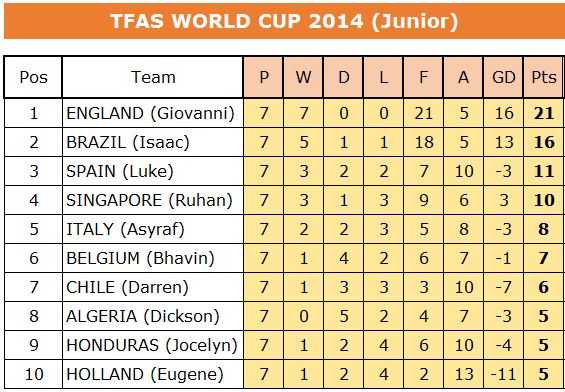 The fight for 3rd spot was between Luke and Ruhan – a repeat of the 7th round of preliminary matches.  Then, Luke prevailed with a tight 1-0 victory … will history repeat itself or can Ruhan make amends and bring home the 3rd-place trophy instead of the 4th-place medal? 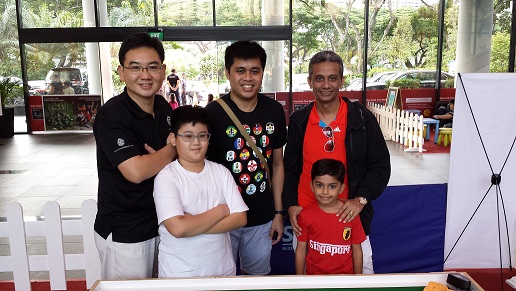 The game was yet again another tight affair with frequent changes of possession and end-to-end stuff.  Both players gave a good account of themselves and had an even amount of chances.  It was Luke who drew 1st blood by taking a deserved 1-0 lead.  But not for long, as Ruhan rallied to snatch an equaliser just before half-time.

The 2nd half continued in the same fashion as the 1st.  To the ‘oohs & aahs’ of the watching crowd, both players had clear chances to take the lead but with neither taking them; eliciting heart-stopping moments from both Father-Coach watching anxiously on the sidelines.

In the end, experience garnered from previous tournaments proved to be the difference.  A calmer and cooler Luke, held his nerves to score his 2nd goal which turned out to be the winnng goal as he held on for a 2-1 victory!! 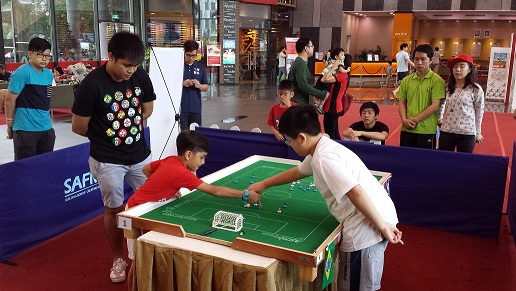 Luke and Ruhan in action in the 3rd & 4th Placing

Giovanni and Isaac – 2 players who had built up both friendship and rivalry during their recent exploits in the Malaysia World Cup the weekend before – contested the Final to determine the Junior Champion of the TFAS World Cup 2014. 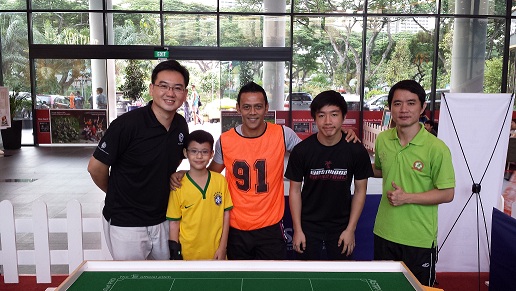 Isaac started the game brightly and had the clearer chances to take the lead.  Unfortunately, his shots were wayward and 1 particular shot that came off the upright proved to be the turning point.  Giovanni, after weathering the initial on-slaught from Isaac, began to impose his game thereafter and had the better clearer chances.  However, both players played a controlled game and continued to hold firm till the half-time whistle.

The 2nd half started with Giovanni taking his game to Isaac; pounding Isaac’s goal with shot after shot.  With 11 minutes remaining, he finally broke down Isaac’s stubborn resistance and squeezed a grounder shot in at the near post.  1-0 to Giovanni!!

From the restart, Giovanni continued his constant pressure in an attempt to secure the victory with a 2nd goal.  Despite being a goal down, under intense pressure and with the minutes on the clock ticking down; a focused Isaac did not panic and stuck to his game-plan.  He did had a couple of openings to get into shooting positions but wrong decision-making meant that these did not materialised.

The 1-0 scoreline remained till the final whistle.  With that, Giovanni concluded an excellent week with his 2nd Junior Champion title in 8 days!!  In fact, he also created history by being crowned as the reigning Junior Champion of both the Malaysia and Singapore World Cup tournaments at the same time!!  Well done, Giovanni!! 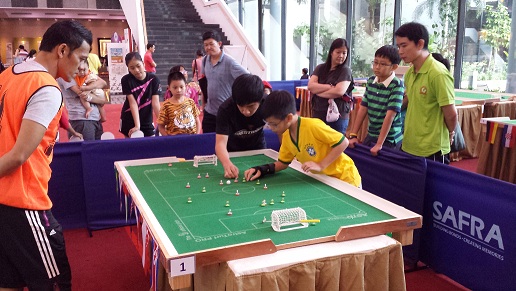 Giovanni and Isaac in action in the Final

As the Junior event draw to a close by day’s end, a BIG PAT on the backs of all Junior players who sportingly participated.  A BIG CONGRATS to all winners & WELL DONE to all!!  Fantastic job!! 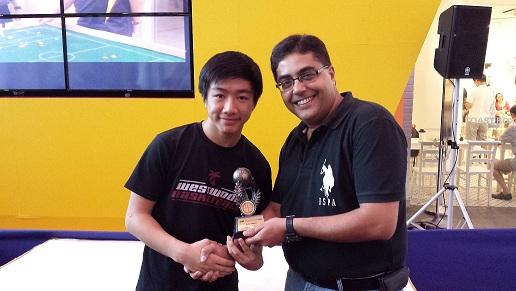 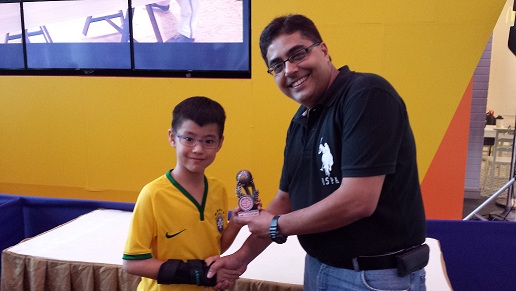 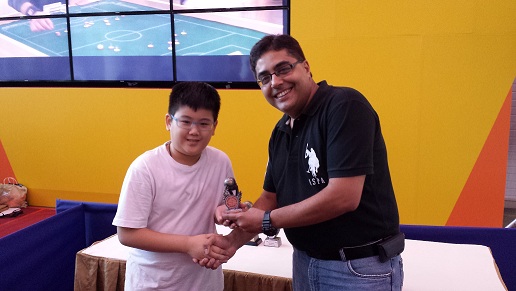 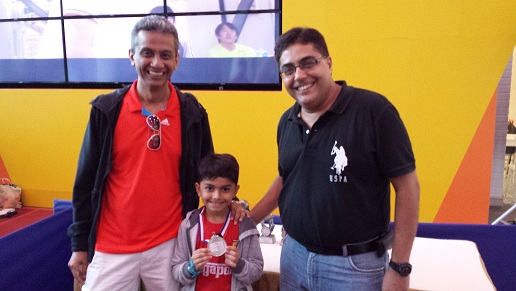 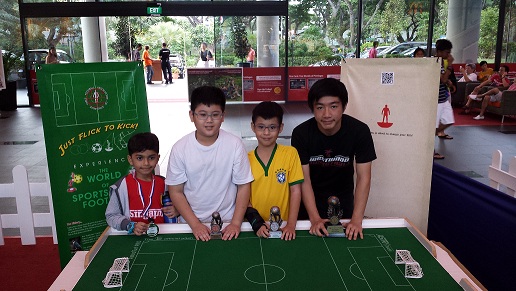 Tomorrow we will see the Seniors/Old-Timers, together with some Junior players, battling out in the TFAS World Cup 2014 Open Tournament.  Who will emerged as the Open Champion at SAFRA Toa Payoh?  Be there or be square …

FOR THE LOVE OF THE GAME …