TFAS is pleased to announce the participation of Team Singapore in the FISTF Subbuteo World Cup 2014 on the 6 – 7 September at Rochefort, Belgium.  This is the first time in the history of local table football that a Team from Singapore is competing in the Team Competition event.  It is also the first time that TFAS is sending Junior players to the ‘Under-12’ event.

Team Singapore comprises of Rudy Hesty Roselan, Bernard Lim, Luke Lim and Isaac Lim.  Representing our country, the team will be playing in the ‘Open’ category of the 16-nation Team Competition event against the very best nations from around the world.  In fact, Singapore is the only nation outside of Europe/Americas and also the only nation from Asia to participate in this year’s Team Competition event.

Largely still an experimental/development team – with 11-year-old Luke and 8-year-old Isaac teaming-up with adults Rudy and Bernard – the Team hopes to gain invaluable experience and exposure by playing against some of the very best in the world of Table Football.  TFAS applauds the courage of our 2 Junior players who are undaunted with the prospect of playing against adult players.

TFAS wishes our World Cup players the very best in Rochefort, Belgium; and hopes that they carry the Singapore flag high and do our country proud!!! 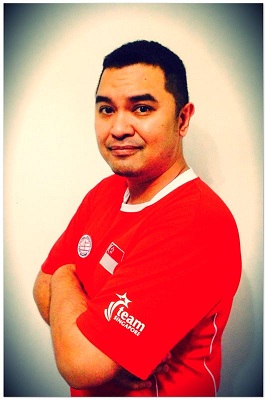 Playing Experience:
Started playing in 1989 with groups of friends from the east of Singapore, Rudy Joined his first tournament in the Singapore Junior Nationals aged 14 and managed to get Third placing.  He went on to play for another year or two before the game faded off in Singapore.  In 2010, Rudy managed to stumble back into the game at Orchard Central where he was introduced back into the game by TFAS buddies.  His most memorable event is winning the TFAS Futures in 2010 against a field of seasoned players.  Rudy aspires to play in the FISTF World Cup; with the dream nearly coming through this year at Rochefort.  Through the game, he hopes to continue making lots of friends and to continue playing even after retiring from his full time job.

Playing Experience:
First started playing the game as a 9-year-old boy back in 1981 with his older brother.  After the initial years of playing ‘local derbies’ with his brother, Bernard began to play competitively in national level tournaments organised by the then Subbuteo Association of Singapore right up to the late 1980s and early 1990s.  Like many old-timers, Bernard stopped playing when the Association was dissolved; and the transition to adulthood took precedence.   After a hiatus of more than 20 years, Bernard re-connected with the game again in June 2013 and has been playing since.  He is estactic to be able to finally fulfill his boyhood dream of representing Singapore (at the age of 42) to play in the Subbuteo World Cup!!

Playing Experience:
Introduced to the game by his father in Nov 2013, Luke has only been playing the game for 9 months.  His interest in the game is so immense that he first started by making his very own teams out of used bottle caps and paper figures; and using paper balls.  He has also written a handbook titled ‘How to Play Subbuteo: The Basic Rules’ to share with his classmates.  According to Luke, he is fascinated by how a game with simple objects can lead to complex game situations and lots of excitement; and he likens this game to a combination of chess, carrom and football.  This is both his first international overseas tournament and first FISTF Subbuteo World Cup appearance. 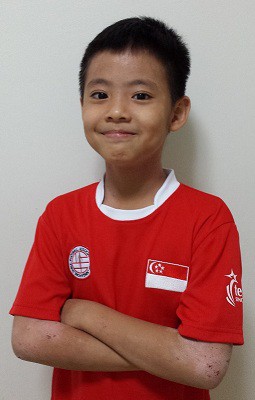 Playing Experience:
Isaac, like his older brother Luke, was introduced to the game by his father in Nov 2013.  A keen and avid footballer himself, Isaac sees many similarities in both games and the tactics of one can be applied to the other.  As a Subbuteo player, he has made good progress over the last 9 months.  He is excited to be travelling to Rochefort, Belgium in Europe; and to represent his country Singapore in the FISTF Subbuteo World Cup.  Like his brother, this is also both his first international overseas tournament and first FISTF Subbuteo World Cup appearance.