after many years, to play the game/sport they had loved when they were young again.  As the playing sessions got more frequent, they begin to wonder if there were others out there in Singapore who were also missing the game/sport too.  Thus the search begins …

At the same time, they also had the dream of spreading their love for the game/sport to the new generation, the generation who are growing up on electronic and console games.  They shared the common goal to help moderate their overly dependence on such devices to provide their entertainment, interaction and passion.

In early 2009, the Table Football Association of Singapore (TFAS) registered itself with the Registry of Society (ROS), giving itself a platform of both legitimacy and trust to the public. The Association grew, in a few years, from humble beginnings of just a gathering of like-minded friends in assisting the formation of a network of clubs around Singapore, to gaining a foothold on the global stage.  Since then, we have been everywhere promoting the sport of Table Football to the community of Singapore.  We have gained many grounds with the setting up of several playing sites and clubs across our small tropical island. 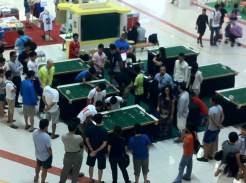 Our main aim remains to build the sport to what it used to be in its glory days in Singapore, with hundreds, or even thousands of players flicking all over the island.  3 National-level Tournaments are held on a yearly basis, during the March, June & December school holidays, together with many smaller mini-tournaments in-between.  With these tournaments, we hope to better spread the awareness of the game … and welcome the players from anywhere in the World to join us.

TFAS, together with the other Associations currently in Asia (i.e. Japan & Australia), hope to further expand the playing community in this part of the World and play a part in making Sports Table Football the most widely played table-top game-sport in the World!

Till date, the Team from TFAS have also managed to retain the title of Asian Champions, for 5 years since the 1st Asian Cup of Sports Table Football competition was held in 2015. With the limitations due to the COVID situation across the world, TFAS retains the crown till the next Asian Cup, planned to happen in year 2023.

The ‘SG Table Football League’ was also setup to provide a continuous and competitive platform in which players can enjoy and improve their game.

Click below to find out more details about TFAS …