An ad-hoc WASPA event took place on the 21 Dec 2014 at the Singapore Sports Hub Library.  Below is the full report by Bernard Lim … 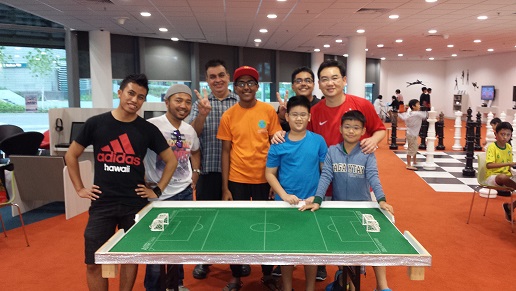 Both Anas and Bernard played true to form and topped their respective Groups; while Haikal and Vikas finished 2nd in the respectively.  Ezan and Chandru finished 3rd to battle for 5th/6th placing ;while Luke and Isaac, the only 2 Junior players battle out for 7th/8th placing.

With both players in preparation for the upcoming SGTF League Season 2015, Ezan ended-up eventual 3-1 winners to take 5th Place.

In the semi-finals, Anas edged out Vikas 1-0 in a very tight affair; while Bernard fully capitalized on Haikal’s numerous defensive errors to progress into the Final.

The cool-headedness of experience triumphed over the exuberance of youth in yet another tight affair between Vikas and Haikal, as Vikas took 3rd Place with a 1-0 victory.

In what was a repeat of the recent Merlion Cup barrage play-off; this time Anas took full revenge with a solid defensive display and his trademark quick counter-attacking and moving-ball shots to catch Bernard unawares and out-of-position defensively.  It was sweet revenge for Anas as he won the game deservingly with 2 goals.

Congratulations Anas !! … and well done to all participating players !!